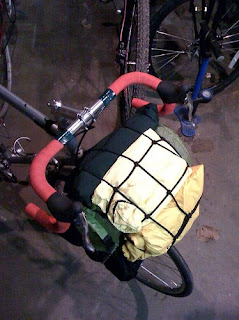 Tomorrow at 5am, riding bikes in many forms, a select group of cyclists will congregate at the Point State Park Fountain in downtown Pittsburgh to begin a 400 mile unsupported “contest” across the state. Part race, part ride, part test of one’s ability to suffer, the Crush the Commonwealth is epic in it’s scope, yet simple in it’s concept: get from Point A to Point B as quickly as possible. With no help. From anyone.

Last year, 10 riders embarked on the westerly route; 3 finished thanks to constant wind and rain. This year the contest heads east across the state; hopefully the change of direction will bring a bit of tailwind with it.

To learn more about this awesome event, head to the Crush the Commonwealth website/blog.

For more depth, and insight into the mind of one of the event’s veterans, head to lockring.not.included. Fxdwhl has been documenting his preparation from racking to packing to bike choice (he’s torn between geared and fixed). You’ll have to check his blog to see what he chose.

You can also find some great photos and reports here.

And yes, there will be dirt.

When Fxdwhl finishes–and he will again–we’ll see if we can get a Pavé exclusive interview.

My experiences might easily fit many cycling fans' definitions of “living the dream.” Since getting hooked on the sport watching Lance Armstrong win the 1993 U.S. Pro Championship, I've raced as an amateur on Belgian cobbles, traveled Europe to help build a European pro team, and piloted that team from Malaysia to Mont Ventoux. As a former assistant director sportif with Mercury-Viatel, I've also seen the less dreamy side of the sport – the side rife with broken contracts, infighting, and positive dope tests. These days, I live with my lovely wife in Pennsylvania and share my experiences and views on the sport at Bicycling Magazine, the Embrocation Cycling Journal, and at my own site, Pavé.
View all posts by Whit →
This entry was posted in Rides. Bookmark the permalink.