As I’m sure you’ve heard, Boonen’s tested positive—again—for cocaine—again. For now he’s been suspended indefinitely by Quick Step and will most likely miss his second consecutive Tour. Of course, we here at Pave hope for the best in this case, but it’s tough to see how he’s going to talk his way out of it this time. First time, shame on you Tommeke; second time, shame on…um…Quick Step? The UCI? Us? And the third time? Hopefully Tom has a good team of advisors to help him through this both publically and privately. April won’t be the same without him, but he’s running out of second (and third and fourth) chances.

Here’s what else is on our minds as the week begins:

1. Alejandro Valverde has been given a 2-year suspension by an Italian tribunal for his alleged role in Operation Puerto. Is anyone else confused? This seems to me like the state of Massachusetts banning Alex Rodriguez from playing baseball within state lines, no? For Valverde, it means no racing in Italy—which means no Tour de France since it passes through. If anyone could offer a clear explanation of the different jurisdictions of the different agencies and countries I’m sure we would all be very appreciative. I can’t make heads or tails of this one.

2. Hopefully you’ve been enjoying the Rapha Continental’s Road Journal as much as I have. This is quite a comprehensive and inspirational project that Daniel and Slate have put together, and it’s wonderful to follow them along their journey. Next week’s my chance to lead them on a foray around Central Pennsylvania. Ridelugged’s James and I have mapped the route, checked it twice, and are ready for our turn. On Saturday I logged 90 miles to get my legs ready for the guys—they’ve effectively been riding 10-day blocks of rides averaging 100+ miles. Hopefully I’ll have the stamina to at least make it sporting. When the photos are released, I’ll be the guy at the back hanging onto the car. 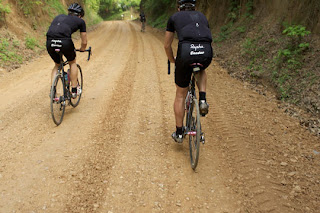 3. For your own chance to ride with the Continental posse, you can sign-up for a Gentleman’s Ride they’re hosting in the DC-area on Friday, May 22nd. If you can take the day off, it will certainly be worth your while. $125 gets you a ticket to ride, food (and drink), and some sweet Rapha gear. Learn more here.

4. The Giro began this past weekend, and it looks to be quite an exciting race. For me, the biggest excitement has come from the developing rivalry between Columbia and Garmin. Before the Stage 1 TTT, Marky-Mark Cavendish once again proved that his sprint prowress is matched only by his ability to run his mouth, saying that Garmin disrespects the Giro by focusing “only” on the TTT. I think we all expected the drama to end with Garmin romping to the win the next day and sticking it to Cavvie by donning the pink jersey. But darn it if the little sprint pixie didn’t put his team’s money where his mouth was. Apparently Garmin was so disappointed that they didn’t even stick around for the end of the stage or to talk to the press (not that there was really any reason too).

Sunday’s stage saw Garmin at the front of the race in the final few kilometers, obviously hoping to help Tyler Farrar beat Cavendish at his own game. Petacchi had something to say about it though. Maybe next year we’ll see more riders on the start line at the Scheldeprijs hoping to hone their sprint form for the Giro.

But here’s my question for Cavendish: does he disrespect races by abandoning as soon as the road gets steep? Hmmm…

5. And speaking of the Giro, we’re not ignoring it. We’re just taking the piano, piano approach and slowly building our way into form.

But I’ll leave you with a Giro prediction: a classics rider will win tomorrow’s Stage 4, and I think it will be Philipe Gilbert.

My experiences might easily fit many cycling fans' definitions of “living the dream.” Since getting hooked on the sport watching Lance Armstrong win the 1993 U.S. Pro Championship, I've raced as an amateur on Belgian cobbles, traveled Europe to help build a European pro team, and piloted that team from Malaysia to Mont Ventoux. As a former assistant director sportif with Mercury-Viatel, I've also seen the less dreamy side of the sport – the side rife with broken contracts, infighting, and positive dope tests. These days, I live with my lovely wife in Pennsylvania and share my experiences and views on the sport at Bicycling Magazine, the Embrocation Cycling Journal, and at my own site, Pavé.
View all posts by Whit →
This entry was posted in Uncategorized and tagged giro, monday musings, ramble, rapha, valverde. Bookmark the permalink.