Wheels – Fit to be Tied 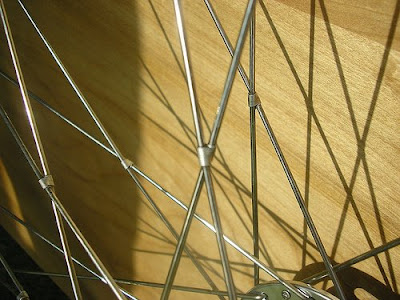 Brief posts this week as I’ve entered the final countdown for the Rapha Centre Ramble tomorrow. After a doctor’s appointment this morning I’ll make a beeline for State College and the Rapha Conti crew.

For now, a question remains, one that perplexes many a rider about to embark on a long ride in adverse conditions: wheels. What should ride? The Ramble has some serious climbing, so an argument can be made for lightweight (Shimano Dura-Ace Scandium); but there’s also roughly 25 miles of dirt roads that make a case for durability and comfort (Mavic Classics Pro SSC’s).

Both sets are some of the best wheels I’ve ever ridden, and both are more than worthy of making the trip.

It all gets me thinking: is there anything more classic than a nice set of wheels? Recently, I discovered that Competitive Cyclist has been offering sets of tied and soldered wheels. Talk about one of cycling’s lost arts!

They’re made by Handspun and boy are they beautiful! Handspun also made a set of classics wheels for Embrocation‘s Jeremy Dunn before he left for his week at Flanders, Gent, and Roubaix. Here are some photos from their Flickr photostream: 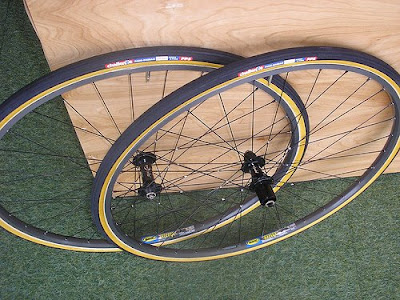 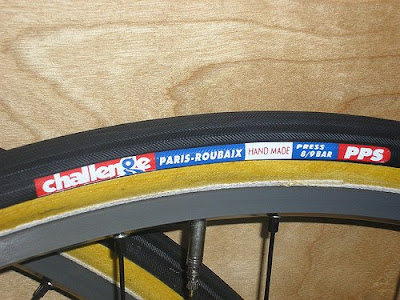 Handspun offers several classic versions to suit your needs. As time passes, we plan to include reviews and articles about various classic and neo-classic wheel and tire options from Shimano, Mavic, Handspun, Challenge and more. But for now, you’ll have to be content with just drooling over these samples.

What’s your favorite set of wheels for the pavÃ©?

My experiences might easily fit many cycling fans' definitions of â€œliving the dream.â€ Since getting hooked on the sport watching Lance Armstrong win the 1993 U.S. Pro Championship, I've raced as an amateur on Belgian cobbles, traveled Europe to help build a European pro team, and piloted that team from Malaysia to Mont Ventoux. As a former assistant director sportif with Mercury-Viatel, I've also seen the less dreamy side of the sport â€“ the side rife with broken contracts, infighting, and positive dope tests. These days, I live with my lovely wife in Pennsylvania and share my experiences and views on the sport at Bicycling Magazine, the Embrocation Cycling Journal, and at my own site, PavÃ©.
View all posts by Whit →
This entry was posted in Uncategorized and tagged handspun, pave, ramble, wheels. Bookmark the permalink.