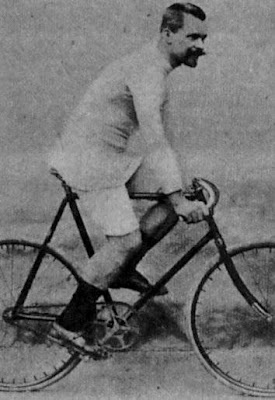 Un pari fou…a crazy bet. By now I’m sure you’ve read the various accounts of last summer’s Rapha Crazy Bet. Maybe you also read of Jeremy Dunn, Guy Andrews, and Co.’s attempt at another crazy bet this April. Well, it seems that I too am not immune from the lure of the seemingly preposterous. Let me explain:

Back in April, I was contacted by a wonderful French fellow named Alexandre who invited me to participate in a “project” he’s hoping to accomplish next Spring. It’s rather simple: he’s trying to assemble a group of folks from around the world to ride the entire Paris-Roubaix race course the day before the pro’s tackle it. Easy, right?

And oh yeah, he wants to do it on a fixed gear.

Yup, you read correctly. You can read more about the project here. There’s photos of Alex, his bike, and of course, various sections of pavÃ©. There’s even a great video of him tackling the sector at le Carrefour de l’Arbe…on his fixed gear! Better than that, Alex tells me he rode the final 90km of the race this past April. On his fixed gear!

Have you wrapped your head around it yet?

Honestly, as crazy as it sounds, I’m intrigued. Incredibly flattered by his invitation, I might just take him up on it. (It’s actually something I was facetiously contemplating with some friends over a few beers last year.)

Whether or not the plan–or at least my participation in it–comes to fruition, the project offers some terrific food for thought. Is it crazy? Yeah, a bit. Can it be done? Only time will tell. And don’t forget, back in the day, it was fixed gear or nothing.

Regardless, Alex seems pretty convicted to make his dream come true. I wouldn’t bet against him.

My experiences might easily fit many cycling fans' definitions of â€œliving the dream.â€ Since getting hooked on the sport watching Lance Armstrong win the 1993 U.S. Pro Championship, I've raced as an amateur on Belgian cobbles, traveled Europe to help build a European pro team, and piloted that team from Malaysia to Mont Ventoux. As a former assistant director sportif with Mercury-Viatel, I've also seen the less dreamy side of the sport â€“ the side rife with broken contracts, infighting, and positive dope tests. These days, I live with my lovely wife in Pennsylvania and share my experiences and views on the sport at Bicycling Magazine, the Embrocation Cycling Journal, and at my own site, PavÃ©.
View all posts by Whit →
This entry was posted in Uncategorized and tagged pave, roubaix. Bookmark the permalink.