Monday Musings – While the Tour Rides Along

While the break rides along in todayâ€™s Stage 3, here are some things for you to take a look at:

1. If you havenâ€™t seen it yet, head to the new Red Kite Prayer. BKWâ€™s Padraig has upped the ante with a site you need to bookmark and/or add to your RSS reader. Expect the same great content you enjoyed at BKW, plus product reviews, guest commentary, and some other surprises. Thanks, Padraig! 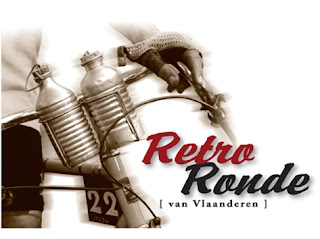 2. The other day I stumbled upon some photos from The Retro Ronde (link’s in Flemish), a sportive ride organized by the RVV Museum in Oudenaarde. Not sure how I missed this one in the past, but itâ€™s certainly been added to my â€œTo Rideâ€ list.

3. And speaking of the Ronde, hereâ€™s the newest installment of the Cervelo TestTeam’s Beyond the Peloton documentary. Roubaixâ€™s next. Great stuff! 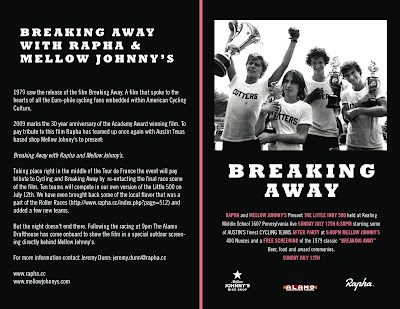 4. If you happen to be in Austin, Texas this weekend, head over to Kealing Middle School at 6:30pm for a re-enactment of the final race scene from the cycling classic, Breaking Away. It’s a Rapha event commemorating the film’s 30th anniversary. After the race, you and your cutter friends can head to a shop owned by a famous Austin cyclist for an awards party and film viewing.

5. This past week The Service Course posted a two-part interview with one of the former DS’s from the ill-fated Mercury-Viatel team of 2001. Given the drama that’s been surrounding Astana lately, it provides a very candid inside view of one of the sport’s more recent team collapses.

6. And finally, I need to give a great thank you to Chris from LockringNotIncluded for coming down for a ride and a cup of coffee last week. If you haven’t been to his blog before, I think you’ll quickly find it to be one of the most poetic you’ve ever visited. There’s just something about his photography and text that cuts right to the core of why we ride. Give him a visit and share in his joy.

And now back to today’s stage!

My experiences might easily fit many cycling fans' definitions of â€œliving the dream.â€ Since getting hooked on the sport watching Lance Armstrong win the 1993 U.S. Pro Championship, I've raced as an amateur on Belgian cobbles, traveled Europe to help build a European pro team, and piloted that team from Malaysia to Mont Ventoux. As a former assistant director sportif with Mercury-Viatel, I've also seen the less dreamy side of the sport â€“ the side rife with broken contracts, infighting, and positive dope tests. These days, I live with my lovely wife in Pennsylvania and share my experiences and views on the sport at Bicycling Magazine, the Embrocation Cycling Journal, and at my own site, PavÃ©.
View all posts by Whit →
This entry was posted in Uncategorized and tagged flanders, lockringnotincluded, rapha, red kite prayer, retro, retro ronde, ronde, rvv, service course. Bookmark the permalink.