Here’s what’s on our minds this Labor Day:

1. This coming weekend, the new and improved Univest Grand Prix returns to Southeastern Pennsylvania. The Saturday road race and Sunday criterium are joined this year by a Friday TTT in Allentown. The final start list is still to be confirmed, but it’s already being rumored that Taylor Phinney will use the race to make his return to competition following a bad fall in the Cascade Classic.

But that’s not the whole story. Along with Saturday’s road race, John Eustice and his crew offer a terrific cyclosportif event for the rest of us to test our legs on the race course. All the hills will be there–a blessing or a curse, depending on your outlook. Pre-registration has closed, but you can still come and sign-up on the day of the event. PavÃ© will be there; hopefully you’ll be able to make it as well.

2. The Vuelta intensified over the weekend with a time trial and mountaintop finish to separate the wheat from the chaff. Roman Kreuziger did a fantastic job of making me look like a fool, losing several minutes in Saturday’s TT. Andy Schleck–the man I tipped for win–followed suit, abandoning on Sunday with a stomach virus. Right now, Alejandro Valverde and Cadel Evans seem to be the two main favorites, with Robert Gesink poised to play the roll of spoiler. Ivan Basso and Tom Danielson look to be making comebacks of their own, while Damiano Cunego appears ready to end his year with a bang–and the possibly the rainbow jersey. 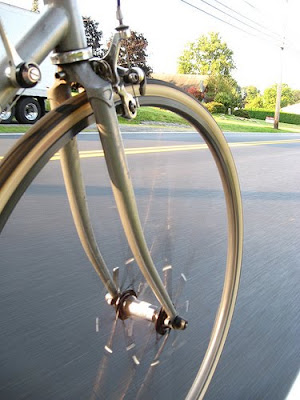 3. For the past few weeks, we’ve been riding a nice set of Neo Classic wheels from Handspun, shod with a pair of FMB Paris-Roubaix tubulars. Look for more photos and reviews in the future. The wheels are currently being passed around by members of the PavÃ© test team to ensure as many perspectives as possible. It will be our first equipment review; we couldn’t have picked a more appropriate product with which to start.

4. If you haven’t had a chance yet, head over to Embrocation Cycling Journal for a new column by yours truly. We’re also eagerly anticipating the arrival of Embro Volume 4. Look for our thoughts once it gets here.

That’s it for today–remember, keep those cobble entries coming! We’ve already had some submissions, but there’s room for all.

My experiences might easily fit many cycling fans' definitions of â€œliving the dream.â€ Since getting hooked on the sport watching Lance Armstrong win the 1993 U.S. Pro Championship, I've raced as an amateur on Belgian cobbles, traveled Europe to help build a European pro team, and piloted that team from Malaysia to Mont Ventoux. As a former assistant director sportif with Mercury-Viatel, I've also seen the less dreamy side of the sport â€“ the side rife with broken contracts, infighting, and positive dope tests. These days, I live with my lovely wife in Pennsylvania and share my experiences and views on the sport at Bicycling Magazine, the Embrocation Cycling Journal, and at my own site, PavÃ©.
View all posts by Whit →
This entry was posted in Uncategorized and tagged handspun, here come the belgians, monday musette, pave, project, univest, vuelta. Bookmark the permalink.