Posted on February 6, 2010 by Whit
The 2010 road season is beginning to pick-up, which means itâ€™s time once again for PavÃ©â€™s Weekend Preview Series. In most places, itâ€™s still winter, so itâ€™s no surprise that February races take place in Europeâ€™s warmest regions. Letâ€™s take a tour! 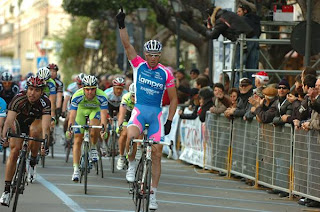 Weâ€™ll start in Southern Italy, where the season kicked-off last weekend with the 4-day Giro di Reggio-Calabria and continues Saturday with the GP Etruschi. The race usually ends in a sprint, and several men take the start with aspirations for a bunch win. The favorite has to be Alessandro Petacchi, the winner of 2 stages at Calabria. Along with Petacchi, Lampre signed Danilo Hondo this past off-season, and so far the lead-out combination seems to be working. Damiano Cunego also takes the line for the boys in pink, although it would be quite a surprise to see him take a win this early in the yearâ€”though stranger things have happened. Other possible winners? ISDâ€™s Oscar Gatto had some good results in Calabria, as did Colnagoâ€™s Mattia Gavazzi. Acqua & Sapone brings Luca Paolini, a man who knows how to win a race from a break and in a sprint. Androni Giocattoli will start Alberto Loddo and Rubens Bertogliati, two men with the speed to take the win. Just for fun, letâ€™s include two men with speedy surnames: De Rosaâ€™s Roberto Ferrari and Ceramica Flaminiaâ€™s Alessandro Maserati. And finally, itâ€™s worth mentioning that Carmiooroâ€™s Emanuele Sella and Micheâ€™s Michael Rasmussen, two men starting the long road back to respectability, are racing as well. 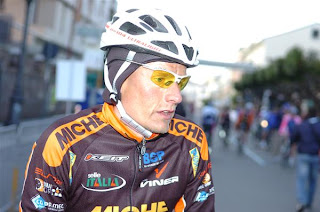 Fotoreporter Sirotti
From Italy to we head to the South of France, and the final two stages of the Etoile des Besseges, a 5-day race that started Wednesday. So far itâ€™s been a sprint-fest, with Vacansoleilâ€™s Borut Borzic taking two wins and the leaderâ€™s jersey. With relatively short stages and flat profiles, itâ€™s anyoneâ€™s guess as to each dayâ€™s winner this weekend. But I wouldnâ€™t bet against Vacansoleil taking another win or two. Theyâ€™re hoping for an invitation to the Tour; a few more winning performances on French soil might just do the trick! 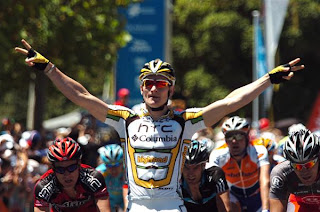 Now onto Spain and the traditional Spanish openers on the island of Mallorca. Mallorcaâ€™s an attractive option to many riders; it offers five days of one-day racing, meaning riders can start and stop as they please. Teams often bring large contingents, mixing and matching their start lists according to the terrain and their ridersâ€™ fitness levels. This yearâ€™s team line-ups closely resemble many of the rosters from Januaryâ€™s Tour Down Under; Mallorcaâ€™s a smart way for the riders to re-acclimate without over-committing. For example, Caisse dâ€™Epargne brings Alejandro Valverde and Luis Leon Sanchez, fresh from their successful Aussie endeavors. Look for Valverde to make a quick exit though, as heâ€™s slated (right now) to start the Tour du Med on Tuesday. TDU winner Andre Greipel takes the line too, obviously hoping to continue his January success on another continent. Heâ€™s joined by Tony Martin, Michael Albasini, and the usual complement of HTC riders capable of taking winsâ€”Monfort, Pinotti, and Siutsou to name a few.

Katusha brings an interesting roster to the race, highlighted by Kim Kirchen, Alexander Kolobnev, and Joaquin Rodriguez. Omega Pharma is bringing Mario Aerts (remember him?), Jan Bakelants, and Jurgen Van Den Broeck, although itâ€™s unlikely the latter will show us anything until at least May. Quick Step split its team between Mallorca and Qatar this week. Stijn Devolder and Sylvain Chavanel scored the trip to Spain, likely due to the slightly more varied terrain it offers. Rabobank brings Oscar Freire and Lars Boom, look for Oscar to start his penultimate season with at least one win here. Raboâ€™s compatriots from Skil-Shimano will be hoping Kenny Van Hummel can begin their season with a win or two. Milramâ€™s Linus Gerdemann is on the list, but Robert Forsterâ€™s probably a safer bet for a win for the German team. Saxo Bank brings the Schleck brothers for some sunny base mileage, as well as Jens Voigt. And finally, I canâ€™t help but mention my early pick for Best Name in the Sport, Footon Servettoâ€™s Johnny Walker!

Italy, Spain, Franceâ€”thatâ€™s it, right? Nope. Weâ€™re forgetting whatâ€™s quickly becoming the early seasonâ€™s hottest warm-up race: the Tour of Qatar. The race begins on Sunday with a short TTT, where Team Sky will certainly hope to out-Garmin everyoneâ€”including Garmin. After that, 5 days of field sprints are in storeâ€”no doubt a welcome sight for Tom Boonen, a man seeking a bit of redemption following a less-than-stellar fall campaign. He wonâ€™t have Mark Cavendish to contend with, but that doesnâ€™t mean Tommekeâ€™s got an easy ride to victory. Several more than capable sprinters fill the start list: Cerveloâ€™s Haussler; HTCâ€™s Eisel; Saxo Bankâ€™s Breschel, Cooke, and Haedo; Omega Pharmaâ€™s Van Avermaet; Garminâ€™s Farrar; Katushaâ€™s Napolitano; BMCâ€™s Burghardt; Saurâ€™s Casper, Milramâ€™s Ciolek, Liquigasâ€™ Bennati and Chichi; and Vacansoleilâ€™s Roman Feillu.
Seriously speaking, aside from the absence of Petacchi, Borzic, Cavendish, Hushovd, and Freire, this has to be one of the finest groups of sprinters ever assembled! But it doesnâ€™t stop there as several other stars are fleeing Europeâ€™s cold winter for the warmth of the Persian Gulf (never thought Iâ€™d type that!). The list readâ€™s like a list of favorites for the Tour of Flanders: in addition to Boonen and Haussler we have Cancellara, Gilbert, Boassen Hagen, Flecha, Maaskant, Pozzato, Ballan, Kuschynski, and Quinziato. Throw-in Bradley Wiggins and Taylor Phinney, and youâ€™ve got all the makings of something special.
Well, you would if it werenâ€™t being held in a desert.
The true racing here will likely occur only within the final 10km each day; but with such a star-studded field, it should quite a spectacle. The only thing the riders need to worry about is the threat of crashesâ€”with so many riders and so few hills to create some separation, thereâ€™s always the risk for big pile-ups. Hereâ€™s hoping everyone makes it through unscathed.
So there you have itâ€”our first Weekend Preview of 2010. As you can see, there are a lot of favorites to choose fromâ€”share your picks and predictions below. And if you have a minute and like what you read, recommend us to a friend or follow us on Twitter. Weâ€™ve got a big season planned!

My experiences might easily fit many cycling fans' definitions of â€œliving the dream.â€ Since getting hooked on the sport watching Lance Armstrong win the 1993 U.S. Pro Championship, I've raced as an amateur on Belgian cobbles, traveled Europe to help build a European pro team, and piloted that team from Malaysia to Mont Ventoux. As a former assistant director sportif with Mercury-Viatel, I've also seen the less dreamy side of the sport â€“ the side rife with broken contracts, infighting, and positive dope tests. These days, I live with my lovely wife in Pennsylvania and share my experiences and views on the sport at Bicycling Magazine, the Embrocation Cycling Journal, and at my own site, PavÃ©.
View all posts by Whit →
This entry was posted in Uncategorized and tagged Mallorca, preview, Qatar. Bookmark the permalink.