Itâ€™s a bit later than usual, but hereâ€™s the penultimate edition of Erikâ€™s Cross Report and Power Rankings. For more coverage, check-out Erikâ€™s site, The Run-up. Heâ€™ll be joining PavÃ© at NAHBS as well, so if youâ€™re lucky, you might catch a glimpse of our in-house cross guru! 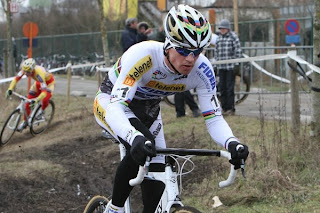 All Photos by Tim Van Wichelen

With just one race left this year, Zdenek Stybar has returned to the top step of the podium and won another major competition. The World Champion did just enough Sunday to hold-off a charging Niels Albert on a slick, icy course in Vorselaar, taking the win and the Superprestige overall title. The big surprise came from Radomir Simunek who lead for a majority of the race before a crash allowed Stybar to catch him with 3 laps to go. From there, it was an all-out dash to the line as Albert and Sven Nys would eventually catch and pass Stybar as he headed to the pits. Albert took full advantage of Stybarâ€™s momentary stoppage, launching an attack for the win. Chaos ensued including a spat between Nys and Simunek resulting in both men going down in a corner, allowing Stybar to slip-by to chase Albert alone. With half a lap to go, Stybar caught Albert and the two went toe-to-toe for the victory and the overall titleâ€”no one could have drawn it up any better. The two traded punches until Stybar got a gap over the fading Albert with a few hundred meters remaining and never looked back.

In addition to the stellar action up front, the penultimate race of the season held a few other surprises as several riders tried to end their seasons on a high note. Dieter Vanthourenhout rode a terrific race. He was dropped from the lead group with only a few laps remaining, but managed to hold-on to 5th. Jonathan Page managed to make his way up to 6th at one point before a few technical mistakes dropped him 7th. Perhaps the most interesting result came from Mariusz Gil as the Polish rider found himself in the top-10 in Vorselaar on Sunday and in the GP de Eecloonaar on Saturday (which was one by Bart Wellens).

All in all, it was spectacular weekend, setting things up nicely for another showdown in Oostmalle on Sunday. It was yet another week of big changes in the rankingsâ€”time to see where everyone landed: 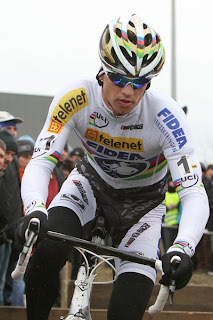 1. Zdenek Stybar (2) – All Stybar needed to do was finish one place ahead of Niels Albert and the Superprestige title was his. He managed to do it, and the spectacular fashion in which he won the race will be etched in my mind forever. The Albert-Stybar battle is long from over though. Stybar’s final chance to do the impossible comes Sunday where he has a very outside chance of taking the GVA Trophy. 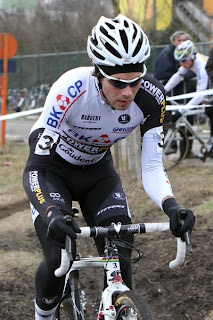 2. Niels Albert (4) – Albert won the final round of the World Cup in January in an attempt to take the overall. Stybar needed to finish 3rd or worse for this to happen; Stybar finished second. Albert needed to beat Stybar by one place on Sunday to take the Superprestige overall; he lost by 6 seconds. Needless to say, itâ€™s been a rough year for the former World Champion. He essentially has been left with nothing after destroying the competition in the first half of the season. He’s tied for 2nd (yes, with Stybar) in the GVA Trophy series. Sunday’s his last chance for a title this season. 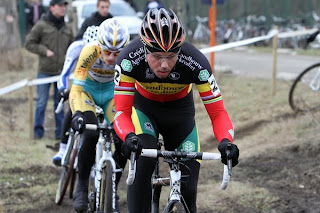 3. Sven Nys (1) – Nys would have you believe that had Simunek not taken him out, he may have won the race. I beg to differ. Ultimately, there’s only one race that Nys needs to worry about: the GVA Trophyâ€™s final round in Oostmalle on Sunday. He has a 14-point lead over Stybar and Albert. Nys hasn’t won much this year; a GVA Trophy would allow him to end the season on a high note.
4. Dieter Vanthourenhout (10) – Vanthourenhout finished 2nd on Saturday and seems to have found some great form. His 5th on Sunday was surprising, but it was a shame he was never really in contention for the win. After a season of ups and downs, it’s nice to see the young Belgian end things on a positive note. 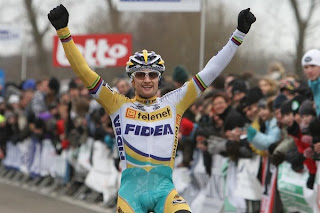 5. Bart Wellens (6) – Wellens finally grabbed a victory this year at the GP de Eecloonaar on Saturday. The race featured all the big names including Nys, Albert, and Stybar. Wellens was able to beat them all and pick-up a well-deserved victory. Next year, may be Wellensâ€™ last, so ending this season on a high note is very important.
6. Radomir Simunek (n/a) – Simunek was in the mix all day on Sunday and at one point it even looked as if he might take win. In the end, he narrowly defeated Sven Nys for 3rd place. I wonâ€™t go too deep into the conspiracy theory, but Simunek did just enough to keep Nys out of Stybar’s way, preventing him from bridging across to Albert. One thing’s for sure: it’s all about the Czechs and the Belgians right now.
7. Klaas Vantornout (5) – Vantornout finished inside the top-10 in both races this weekend, but never managed to make the lead group. I have a feeling that next year Vantornout will do some real damage, adding to the chaos at the front of the field.
8. Kevin Pauwels (3) – Pauwels continues to have a rocky end to the season, only managing 6th and 11th this past weekend. It’s been a long season for the young Belgian, but it appears that his future is very bright. He won Round 7 of the World Cup and has dozens of podium finishes. Perhaps next year,he’ll be in the mix for an overall title in one of seasonâ€™s many race series. 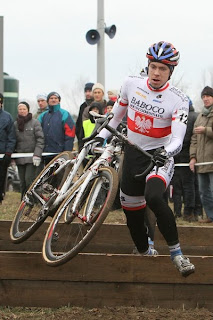 9. Mariusz Gil (n/a) – Gil has won one race this year: the Polish National Championship. Beyond that, he’s finished in the top-10 only twiceâ€”but that was in September and October. Needless to say, the Polish riderâ€™s pair of top-10â€™s this past weekend came as a big surprise. I’m not sure if it’s good luck or late season form, but either way, Gil made it into the rankings for the first time this year.
10. Jonathan Page (n/a) – Page returns to the rankings after a stellar 7th in Vorselaar. His season will conclude with an indoor race at the end of February, before he heads back over the Atlantic for the off-season. It has been a rough year for the American. He started-off strong, but has had sporadic results over the past few months. Perhaps he can put it all together this weekend and go out with a bang.

The final race of the 2009/2010 cyclocross season will take place in Oostmalle, Belgium on Sunday. It’s the final round of the GVA Trophy and after last Sunday’s showdown in Vorselaar, it promises to be a good one. Sven Nys leads Zdenek Stybar and Niels Albert by 14 points, so all Nys really needs to do is finish. Stybar or Albert can take the overall with a win and a Nys finish outside the top-10. Cleary, it’s Nys’ title to lose.

Have a terrific weekendâ€”share your comments below.

My experiences might easily fit many cycling fans' definitions of â€œliving the dream.â€ Since getting hooked on the sport watching Lance Armstrong win the 1993 U.S. Pro Championship, I've raced as an amateur on Belgian cobbles, traveled Europe to help build a European pro team, and piloted that team from Malaysia to Mont Ventoux. As a former assistant director sportif with Mercury-Viatel, I've also seen the less dreamy side of the sport â€“ the side rife with broken contracts, infighting, and positive dope tests. These days, I live with my lovely wife in Pennsylvania and share my experiences and views on the sport at Bicycling Magazine, the Embrocation Cycling Journal, and at my own site, PavÃ©.
View all posts by Whit →
This entry was posted in Uncategorized and tagged Cyclocross, power ranking. Bookmark the permalink.