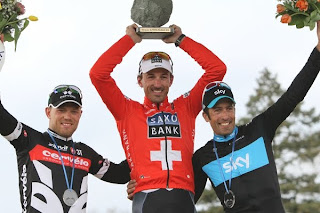 All Photos by Tim Vanwichelen

Admit it, you found yesterdayâ€™s race a bit boring. Unless Cancellara happens to be your favorite rider, there was something a bit anti-climatic about the way he quickly and authoritatively disposed of his competition, motoring away from them all with a little less than 50 kilometers remaining in the race. There was no drama, no tension, and no tactics; he simply picked his moment, and rode off to victory. 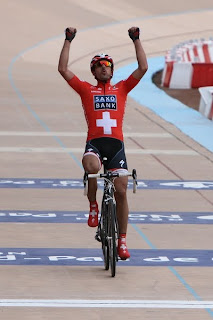 1. But letâ€™s not allow our unfulfilled expectations to prevent us from giving Spartacus his due. His ride yesterday was nothing short of astounding, the kind of dominating performance we see in a classic only once every 20 years or so. As we did after his win in Flanders, we must credit Cancellaraâ€™s team for providing him with a stress-free ride to the raceâ€™s decisive phases. Saxo Bank controlled the peloton for much of the day, at one point having 7 men spread across the front of the leading peloton. Interestingly, the man widely assumed to be Cancellaraâ€™s strongest teammate, Matti Breschel, disappeared just as things got interesting. But in the end, the day belonged to Fabian Cancellara, a truly worthy winner, and the second Swiss rider to complete the Flanders-Roubaix Double. The question now is whether or not Cancellara will take a shot at the Amstel Gold Race and Liege-Bastogne-Liege. Given what weâ€™ve seen, I wonâ€™t discount his chances. Will you? 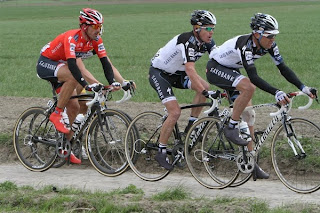 2. Thor Hushovd raced to a fine 2nd-place, the first of two CervÃ©lo riders in the top-5. Thor overcame much this spring, ultimately going one better than his 3rd-place in last yearâ€™s edition. He rode a relatively quiet race, receiving some criticism for his apparent unwillingness to help Boonen chase Cancellara. While it cannot be explained why a team with two men in the group would seem so apprehensive, thereâ€™s the distinct possibility that they just had nothing to give. When you go back and watch the highlights, itâ€™s clear that each rider was at his limit and doing everything he could just to hold the wheel directly in front of him. Congratulations as well to Thorâ€™s teammate, Roger Hammond, for another great ride in Roubaix. Believe it or not, itâ€™s not Hammondâ€™s best result on the pavÃ© though; he finished 3rd in 2004.

3. Juan Antonio Flecha put Team Sky on the podium in the teamâ€™s first foray into Hell with 3rd-place on the day. Overall, itâ€™s the Spaniardâ€™s third visit to the podium in Roubaix and his fifth finish inside the top-6. Skyâ€™s pleased with the ride, but Flecha has to be wondering just what he has to do to win. His team did well to protect him into the race finale and he made no errors, tactical or otherwise. In the end, he simply succumbed to two stronger ridersâ€”nothing more, nothing less. 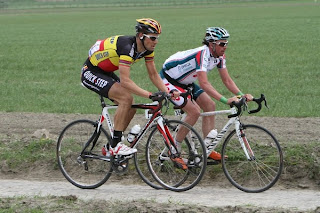 4. Tom Boonen was the dayâ€™s biggest loser, taking 5th in a race he was favored to win. Much can be said about Boonenâ€™s performanceâ€”thereâ€™s a lot of blame to go around. First of all, Boonenâ€™s Quick Step team left its leader far too isolated when the race began to intensify. Even before the Forest of Arenberg, Boonen was all but alone while his competitorsâ€”especially Cancellaraâ€”had several teammates at their sides. Heading into the final 60 kilometers with a relatively large group, Boonenâ€™s anxiety began to show as he launched a series of unsuccessful attacks inside a span of about 10 kilometers. These were moves that should have been made by his teammates, but they were all too busy dropping-out, crashing, or chasing back to the front. Had Boonen some help in softening the front of the field, he might have had the legs to go with Cancellaraâ€™s race-winning attack moments later. Had he been paying attention, that is.

In the end, itâ€™s easy to fault Boonen for a mistake many might have made. The road was wide, the group was tired, and a small group had just escaped to give the group some purpose. Surrounded by other favorites, it wasâ€”he thoughtâ€”the ideal time to slip to the back, grab a drink, stretch his legs, and follow wheels for a bit. While Cancellara certainly wasnâ€™t planning to attack at such a moment, once he looked back and saw Tommekeâ€™s poor placement, he had to take his chance.
Boonen chased valiantly upon realizing the severity of the momentâ€”he was clearly riding at a level better than his companionsâ€”but in the end it wasnâ€™t enough to close the gap created during his moment of inattention. Overall, Boonenâ€™s spring was one most riders would love to have had; but for a man boasting such an impressive resume, itâ€™s a disappointment.

5. Bjorn Leukemans continued his impressive run with a 6th-place finish, two spots below his best-ever result in Roubaix. Watching Leukemans bury himself to hold Cancellaraâ€™s wheel is perhaps the best highlight of all the cobbled classics. As for his fist pound, Iâ€™m not sure Leukemans was responding to Cancellaraâ€™s speed as much as he was expressing his frustrations with a front tire that was losing air and a moto that seemed slow to accelerate. (Hereâ€™s a great link to a video of the entire sequence–feel free to form your own assumptions.) Regardless, hats-off to Leukemansâ€”letâ€™s see what he does in Amstel. 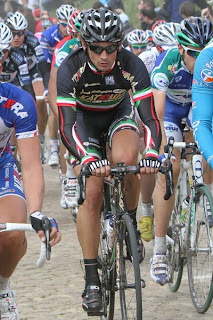 6. Filippo Pozzato came home in 7th-place, taking the Ballerini Prize as first Italian finisher. It was a good result for the Italian, but one that only begs the question as to what he could have accomplished had he not been hit with the flu in the week leading up to Flanders. The black kit was a nice touch, if for no other reason than it softened the effect of those god-awful Lazer helmet covers.

7. As for Leif Hoste, he can at least say he tried. His attack with Leukemans and Sebastien Hinault set-up Cancellaraâ€™s winning attack. His 8th-place finish is a solid result; but looking at the competition, itâ€™s tough to see him ever getting the win he so craves.

Looking down the rest of the finishers from Sundayâ€”which is easy to do considering there were only 74 of themâ€”there are few highlights:

8. George Hincapie was literally right next to Cancellara when the Swiss rider snuck up the left side of the road. I took some heat for touting Georgeâ€™s chances in the days before the race; now it appears I need to read the writing on the wall. One comment yesterday compared George to Levi Leipheimer, another man known more for his misses than his hits. After another Roubaix where George seemed able to do little more than follow, itâ€™s looking like the comparison might be appropriate. Iâ€™m sorry George, but maybe Roubaix is one nut youâ€™ll never crack. Georgeâ€™s BMC teammates fared no better; none of them completed the race.

9. Other non-finishers included Peter Sagan and Lars Boom, while Stijn Devolderâ€”after another day spent at or off the backâ€”could manage no better than 42nd.

10. As for Garmin, we expected big things from Tyler Farrar and his colleaguesâ€”what we got was Martijn Maaskant in 22nd, the teamâ€™s only finisher.

On a day of sunshine and dry conditions, a strong headwind is the most common excuse for the attritionâ€”that and the other-worldly exploits of a rider enjoying the best form of his career. Domination might be boring, but it never fails to impress.

Enjoy your Mondayâ€”share your thoughts below.

My experiences might easily fit many cycling fans' definitions of â€œliving the dream.â€ Since getting hooked on the sport watching Lance Armstrong win the 1993 U.S. Pro Championship, I've raced as an amateur on Belgian cobbles, traveled Europe to help build a European pro team, and piloted that team from Malaysia to Mont Ventoux. As a former assistant director sportif with Mercury-Viatel, I've also seen the less dreamy side of the sport â€“ the side rife with broken contracts, infighting, and positive dope tests. These days, I live with my lovely wife in Pennsylvania and share my experiences and views on the sport at Bicycling Magazine, the Embrocation Cycling Journal, and at my own site, PavÃ©.
View all posts by Whit →
This entry was posted in Races and tagged flecha, hincapie, hushovd, monday musette, paris-roubaix, pozzato. Bookmark the permalink.