The Spring Classics come to a close this weekend with the 96th edition of La Doyenne, LiÃ¨ge-Bastogne-LiÃ¨ge. Covering 10 of the Belgian Ardennesâ€™ most legendary ascents, this yearâ€™s event looks certain to be an exciting and memorable finale to the first major phase of the 2010 season. This yearâ€™s start list features several men capable of taking the win, including a handful of riders we might be watching come July in this yearâ€™s Tour de France. For now, hereâ€™s a run-down of the top men to watch this Sunday. 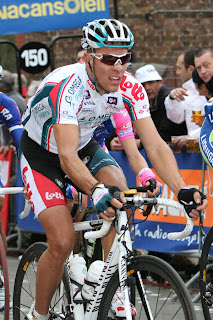 The last Belgian to win LiÃ¨ge-Bastogne-LiÃ¨ge was Frank Vandenbroucke in 1999. While Philippe Gilbertâ€™s win in last Sundayâ€™s Amstel Gold Race was a welcome sight to Belgian fans everywhere, it will likely become an afterthought should Gilbert come through Sunday in Ans. Gilbertâ€™s enjoying the form of his life right now, calling to mind his indomitable run last autumn from Paris-Tours through the Tour of Lombardy. Gilbert â€œtook it easyâ€ on Wednesday in FlÃ¨che Wallonne, finishing in a group with the other main favorites a handful of seconds behind the winner, Cadel Evans. Gilbertâ€™s talents are naturally suited to the challenging parcours Sundayâ€”the climbs suit an aggressive rider possessing a sharp uphill acceleration. With the maturation of teammate Jurgen Vandenbroeck into a super-domestique, Gilbert might just have the found the missing piece separating him from a win in his first spring Monument. 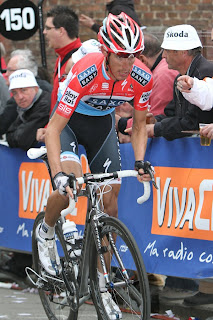 Andy Schleck won last yearâ€™s LiÃ¨ge-Bastogne-LiÃ¨ge on his way to a 2nd-place finish in the Tour. He returns this year well-prepared to take a repeat win. Following quietly impressive performance in Amstel and FlÃ¨che, Schleck hopes his talented teamâ€”led by his older Frankâ€”can keep him out of trouble until the major selections are made. He too is riding at a top-level as indicated by his attacks in the Gold Race. I suspect Schleck will be riding with a bit of added motivation this year, as his main Tour rival, Alberto Contador, takes the line as well. A win over Contador would certainly give Schleck a mental edge heading into the summerâ€”something he might appreciate when the battle with Contador reconvenes in July.

Two-time LiÃ¨ge-winner Alejandro Valverde comes to this yearâ€™s event hoping to move one step closer to tying Eddy Merckâ€™s record 5 victories. Valverdeâ€™s had a solid season, but has yet to score a major victory, finishing 2nd in both Paris-Nice and the Tour of the Basque Country. To take the win, Valverde needs to find a better way to utilize the talents of current world #1, Luis Leon Sanchez. If Valverde and his compatriot can successfully play-off one anotherâ€™s talents, Caisse dâ€™Epargne could take an important win as it continues to try and entice a new title sponsor.

Damiano Cunego has yet to bag the Ardennes victory he has sought for the past several years. Usually he peaks too soon; this year though, he seems to be hitting his stride at just the right time. Better still, Cunegoâ€™s not the #1 favorite for Sunday, something relieving a bit of the pressure the Italianâ€™s faced in the past. Italy hasnâ€™t won many important races this year; Cunego hopes to change that. 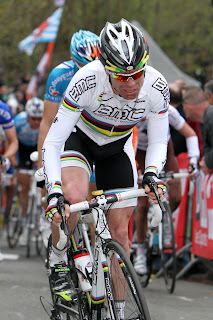 What does Cadel Evans have to do to earn our confidence and respect? The World Title? He got lucky. FlÃ¨che Wallonne? Contador choked on the Mur. But what about LiÃ¨ge-Bastogne-LiÃ¨ge? Iâ€™ll believe it when I see it. Well, if he rides as intelligently as he did Wednesday, as confidently as he did in last yearâ€™s Tour of Lombardy, and as aggressively as he did in Mendrisio, then â€œsee itâ€ we might. No, I donâ€™t like Cadel Evans either, but we donâ€™t have to like him to respect his chances Sunday.

Two races, two attacks, and two captures approaching the final ascent to the finish lineâ€”Katushaâ€™s Alexandr Kolobnev is due for a win this week. He reminds me of Philippe Gilbert from a few years agoâ€”incredibly strong, immensely aggressive, but a bit too eager to take things into his own hands. Often attacking at inappropriate times, Kolobnev needs a bit more patience and maybe a little more confidence in his chances against the other major favorites should he wait. That said, in Amstel and FlÃ¨che he was attacking a large group; tomorrow he should have the luxury of attacking a smaller, more select group. Without a large coalition able to reel him back in, Sunday could finally be Kolobnevâ€™s day.

Like Kolobnev, Roman Kreuziger is another rider who might benefit from a bit of patience. Incredibly talented, Kreuziger often tries to force things a bit too soon rather than wait to try his chances in the finale. Liquigas might try using Vincenzo Nibali sooner, perhaps putting him a break inside the final 40 kilometers, thus forcing Kreuziger to follow the moves by other teams. When Nibaliâ€™s caught, thatâ€™s the time for the young Czech to make his move. If he manages to take the win, consider his move to Omega Pharma-Lotto in 2011 all wrapped-up. 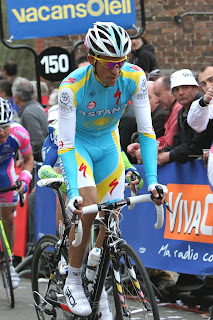 Alberto Contadorâ€™s 3rd-place finish in Wednesdayâ€™s FlÃ¨che Wallone might be the best he can hope for this week. While I would love to see a Tour de France champion take a spring classic, I think Contadorâ€™s too inexperienced in races of this sort. Classics require a different tactical approach than stage racesâ€”being the strongest does not always mean youâ€™ll win. That said, Contadorâ€™s team is strong and his resolve has been strengthened following what must have been an embarrassing defeat Wednesday. He says heâ€™s racing only for the experience; to me, that just proves heâ€™s racing to win. 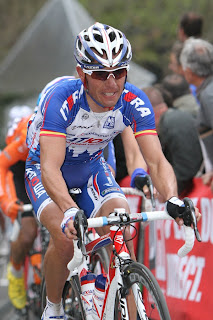 Katushaâ€™s Joaquin Rodriguez rebounded from a poor performance at the Amstel Gold Race to take 2nd-place in Wednesdayâ€™s FlÃ¨che Wallonne. Like his teammate Kolobnev, Rodriguez is a talented rider with lots of top results, but few major wins. His solid performances in last yearâ€™s Ardennes classics and Worlds earned him a new contract and a new team, but it remains to be seen if the Spaniard has the goods to take the next step. Kolobnev and Sergei Ivanov are more aggressive than Rodriguez, traits that suit them in a race like LiÃ¨ge. While Rodriguez could conceivably react and cover his way into the final selection, heâ€™ll have to attack at some point if he wants to take his first big win.

At 38, Radio Shackâ€™s Chris Horner seems to be getting better with age. After 2nd place in the Tour of Sardinia, Horner went one better at the prestigious Tour of the Basque Country before scoring top-10 results in Amstel and FlÃ¨che. A smart aggressive rider, Hornerâ€™s just the man to take advantage of the fact that few consider him a realistic candidate for the win. With Popovych, Kloden, and Zubeldia, Hornerâ€™s team has enough experience and talent to keep him out of trouble early, positioning him to play a role in the finale.

Sergei Ivanovâ€™s the last of 3 Katusha riders deserving consideration for Sunday. Buoyed by strong performances in last yearâ€™s Ardennes classics, Ivanov took a 10-day training camp in the Canary Islands following the Tour of Flanders just to prepare for this yearâ€™s events. Like Kolobnev, Ivanovâ€™s showed no lack of willingness to attack, animating the finales at both Amstel and FlÃ¨che Wallonneâ€”as to whether he was softening the race for Kolobnev and Rodriguez or trying to play his own card remains unclear. Should he make the selection on La Redoute; heâ€™ll warrant careful attention from the favorites, for heâ€™s been racing like he has nothing to lose. 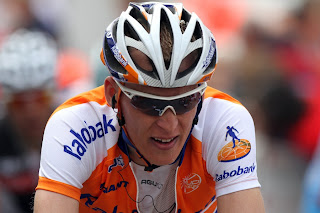 I was starting to lose faith in Robert Gesinkâ€™s ability to win major one-day races; and then I reminded myself that heâ€™s only 23. Clearly thereâ€™s time for the Dutchman to develop the confidence he needs in races like Amstel and LiÃ¨ge. His Rabobank squad is bolstered by the addition of Denis Menchov whoâ€™s clearly riding to top-off his form for next monthâ€™s Giro. If both can stay upright, might Menchov be enough to help Gesink become LiÃ¨geâ€™s first Dutch winner since Adrie Van der Poel in 1988?

Vincenzo Nibaliâ€™s a bit of an enigma. He receives little press outside of Italy, but has quietly risen through the ranks to be an outside podium contender in this yearâ€™s Tour de France. Following an aggressive performance at Milan-San Remo, Nibali continued to impress with solid rides at Amstel and FlÃ¨che. That said, itâ€™s hard to tell if Nibaliâ€™s racing to win, or simply racing to train for July, as his attacks often seem out of place and his top results come by following wheels. Heâ€™s just as likely to finish on the podium Sunday as he is to spend all day in a break.

Finally, Canadian Ryder Hesjedal comes to LiÃ¨ge-Bastogne-LiÃ¨ge hoping to score Garminâ€™s first win in one of cyclingâ€™s 5 Monuments. Hesjesdalâ€™s been riding well as of late, scoring high finishes in the Basque Country, Amstel, and FlÃ¨che. Ultimately, itâ€™s hard to predict Hesjedalâ€™s chances Sunday. Does he have the talent to defeat men like Schleck, Gilbert, and Valverde? The only North American to win LiÃ¨ge was Tyler Hamilton in 2003 when he several favorites to take the victory in Ans. With a young, but talented team under the veteran leadership of Christian Vande Velde, Hesjedal might just have what it takes.

As for my prediction, with so many favorites itâ€™s hard to choose. In the end, I think Gilbert will do whateverâ€™s necessary to end the spring with a Belgian victory. Valverde will win the sprint for 2nd-place, while a defeated Andy Schleck will sit-up just before the line, allowing Chris Horner to take 3rd.

Who are your picks for Sunday? Share them below.

My experiences might easily fit many cycling fans' definitions of â€œliving the dream.â€ Since getting hooked on the sport watching Lance Armstrong win the 1993 U.S. Pro Championship, I've raced as an amateur on Belgian cobbles, traveled Europe to help build a European pro team, and piloted that team from Malaysia to Mont Ventoux. As a former assistant director sportif with Mercury-Viatel, I've also seen the less dreamy side of the sport â€“ the side rife with broken contracts, infighting, and positive dope tests. These days, I live with my lovely wife in Pennsylvania and share my experiences and views on the sport at Bicycling Magazine, the Embrocation Cycling Journal, and at my own site, PavÃ©.
View all posts by Whit →
This entry was posted in Races and tagged LiÃ¨ge-Bastogne-LiÃ¨ge, preview. Bookmark the permalink.