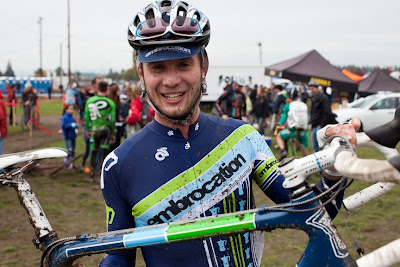 Photo by Dan Sharp
Embrocation, Rapha, Rouleur, Bicyclingâ€”the list goes on and on.

Jeremy Dunnâ€™s hands are in several projects; chances are youâ€™ve seen something of his over the last 2 yearsâ€”especially if youâ€™re a frequent visitor to PavÃ©.  Heâ€™s professional, talented, hard working, andâ€”as I painfully learned during my day with the Rapha Continental, very, very fast.  Recently, Jeremyâ€™s taken some time from of his busy schedule to answer some questions and share his thoughts on cycling, heroes, and of course, pavÃ©.

We hope you enjoy the conversation!

1.  Hi, Jeremy, and thank you for taking the time to talk to PavÃ©.  Letâ€™s start with something basic: whatâ€™s your 6-word memoir?

I’m not done with it yet.
2.  Clearly, Jeremy, but I doubt if someone as hard-working as you ever will be.  Youâ€™re originally from the Midwest, then there was Boston, and now youâ€™re in Portland.  Can you connect the dots for us?  What inspired the moves?
Letâ€™s see, I moved from the smallest of small townsâ€”Lancaster, Wisconsinâ€”to Milwaukee, and from there to Boston, and now I find myself roaming the streets of Portland. Milwaukee to Boston happened because at one point in my life I was into the documentary television world, and the best place to be for that was Boston. (PBS, in fact.) Good times over there…but then I got bored of thatâ€”or maybe it got bored of me? Can’t tell which it was. Either way I went back to working in the cycling industry and that took me all over the place, finally landing on Portland.
3. â€œI went back to working in the cycling industryâ€ is a bit of an understatement.  Youâ€™re involved in so many endeavors and projectsâ€”maybe too many to discuss here.  But how â€˜bout we start with Embrocation?  How did it begin?  What inspired you to get it rolling?
Embrocation started as an idea really. What I thought was, it would be great to put out a monthly little publication that would come out three times a year, all during the cyclocross season. But then, as I started to pull together writing and photos for it, and realized that I knew absolutely nothing about magazines or how to put them together, the project kind of evolved. This happened by basically pushing my own deadlines back further and further and seeing the content grow larger and lager. Plus, I read an issue of Rouleur somewhere in there, which totally changed my perspective on what a cycling publication really could, and should, be: an honest, beautiful look at the sport. Thing was, they were only talking about what was going on in Europe. So, I shifted my focus a little bit.  Richard Sachs and Chris Igleheart were also both an inspiration behind getting it going. I took a real liking to some custom steel-ness and when I saw the passion that these two were putting into their bicycles it made me want to produce something that was akin to that sentiment.
4. Whatâ€™s the biggest challenge associated with running your own journal?
Getting people to submit stuff on time and being on time with deadlines that I’ve set for myself (insert nervous chuckle).  It always seems that time is slipping away from me. I’ve got all these ideas and they all try to come out at once, so what I try to do is make sure that they have the proper outlets for getting out–sometimes they do and sometimes they don’t.
5. The Embrocation Racing Team was a good idea.  When did you decide to roll the magazine and name into team sponsorship?  Why?  How did it come to be?
Well, that’s always been the idea. I, along with a few others like Craig Roth (of Cambridge Bicycle and way back, Strangers Racing), have been putting together these slightly small scale cycling teams for a couple of years now. Racing for one shop or another (Harris Cyclery and then Cambridge Bicycle) and we always used to say to each other, wouldn’t it be cool to be racing for something that we were doing, making, producing…I mean isn’t the point of the team to advertise? Well, letâ€™s make something that we want to advertise…and then at some point it made sense to just kind of roll them into one. 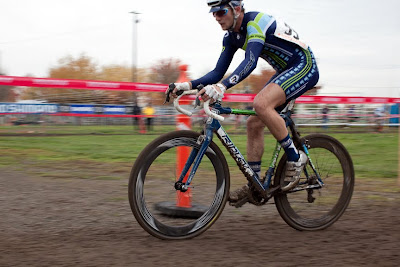 Photo by Dan Sharp
6. What is your vision for Embrocation?  Where do you see it headed in the next several years?
Years? Shoot, man I’m trying to focus on the next few weeks! Although, to be completely honest, it blows my mind to know that a year has passed and I’ve met and exceeded my goal of putting out more than one volume of Embrocation.  [Editorâ€™s Note: if youâ€™ve never laid hands on a copy of Embrocation, Volume 4â€™s a terrific place to start!  You can order it here.]
7. Now the Rapha Continental.  Whatâ€™s your role?  How did you come to be involved?
Oh boy. That’s a good one. Short answer: I was asking around to find some people to help out with my booth at NAHBS two years ago in Portland and somehow paired up with the â€œDynamic Duoâ€ of Daniel Wakefield-Pasley and Dan Sharp. Both were involved with the inception of this “Continental Project” and soon enough, so was I. I had the fortune of being able to pull together some of the bicycle builders from the East Coast as well as a crew of incredibly tough, incredibly handsome gentleman to ride said bikes. My role now: always evolving, always writing, always riding.
8. And now the inevitable question for anyone involved in the Rapha Continental: how do you define â€œepicâ€?
I would like to think I’ve come to define it by saying that as long as I’m having a good time out there then its epic. Bill Strickland recently told me to re-read every sentence that I write and ask myself if each and every one is completely honest. Well, I just did that, and I feel completely OK with the above statement.   That being said, the hardest days always end up being the most fun.
9. Well, youâ€™ve certainly had a lot of fun then.  Whatâ€™s been the most rewarding thing youâ€™ve experienced as a result of your involvement with the Rapha Continental?
Well, I think that seeing the whole project come to fruition is pretty great. But the best thing? Absolutely the most rewarding thing about the project?
The people involved. Each and every one of the riders on the “team” I would call a friend. And when you’re out riding with your friends it is going to be rewarding every time you swing your leg over the bike.
That, and standing in a taxidermy shop in West Virginia watching a man that makes his own moonshine play the banjo for my friends and I who were out on a bike ride together.
10. When packing for a trip with the Conti crew, whatâ€™s one thing you never leave home without and why?
There is always something that gets left out. But the one thing I never leave home without is…well, embrocations. How can I help to insure that everyone looks great on the Conti rides? Make sure that I have enough embrocation for everyone.

That’s it for Part 1.  We’ll post Part 2 later in the week in which Jeremy discusses what bikes he’s riding, heroes, classic equipment, and of course–pavÃ©.

My experiences might easily fit many cycling fans' definitions of â€œliving the dream.â€ Since getting hooked on the sport watching Lance Armstrong win the 1993 U.S. Pro Championship, I've raced as an amateur on Belgian cobbles, traveled Europe to help build a European pro team, and piloted that team from Malaysia to Mont Ventoux. As a former assistant director sportif with Mercury-Viatel, I've also seen the less dreamy side of the sport â€“ the side rife with broken contracts, infighting, and positive dope tests. These days, I live with my lovely wife in Pennsylvania and share my experiences and views on the sport at Bicycling Magazine, the Embrocation Cycling Journal, and at my own site, PavÃ©.
View all posts by Whit →
This entry was posted in Uncategorized and tagged interview. Bookmark the permalink.