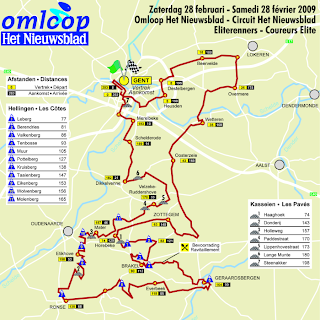 As mentioned in an earlier post, the â€œrealâ€ season begins this weekend. The Omloop Het Nieuwsblad (formerly â€œHet Volkâ€), officially opens the Northern season with over 200km of the finest stuff Belgium has to offer. While not possessing quite the prestige of its bigger brother, the Tour of Flanders, the Omloop is still nothing to sneer at. Any rider worth his salt is eager to add it to his palmares. Head to the great folks at Cyclingnews or Pez for some reports and previews chock full of facts and figures.

If I were a betting man, Iâ€™d put my money on three riders:

Gert Steegmans could profit from Filippo Pozzatoâ€™s presence on his Katusha team. Able to win in a break or a sprint, Steegmans could find himself in a move allowing him to sit-on and wait for his team to bring the race back together for his kopman. If the break fails, heâ€™s fresh for whatever ensures. If itâ€™s successful, heâ€™s perfectly placed to cover attacks in the finale or win the sprint. If Iâ€™m completely wrong and he has no role in the race, look for him Sunday in Kuurneâ€”a race with a much greater chance of ending with a bunch sprint.

Greg Van Avermaet is on the verge of something big. Winner of a stage and the points jersey in last yearâ€™s Vuelta, heâ€™s primed for a breakout performance in one his countryâ€™s biggest events. Like Steegmans, perhaps his biggest asset is also his potentially biggest obstacleâ€”his Silence-Lotto teammates. The defending champion and two-time winner, Philip Gilbert is now his teammate. Gilbert is eager to set himself alongside the raceâ€™s greatest legends with his third win. This could harm Van Avermaetâ€™s chances, or, like Steegmans, help them immensely.

Bjorn Leukemans is a rider with something to prove. Winner of a stage in the Etoile de BessÃ¨ges earlier this year, Leukemans wants to prove that he has fully rebounded from the scandal that found him serving a 2-year suspension for le dopage. Heâ€™s a wild card for sure, with a team (Vacansoleil) that is certainly a step below some of the other squads on the starting line. However, with a smart, savy race he could find himself on the podiumâ€™s top step.

My experiences might easily fit many cycling fans' definitions of â€œliving the dream.â€ Since getting hooked on the sport watching Lance Armstrong win the 1993 U.S. Pro Championship, I've raced as an amateur on Belgian cobbles, traveled Europe to help build a European pro team, and piloted that team from Malaysia to Mont Ventoux. As a former assistant director sportif with Mercury-Viatel, I've also seen the less dreamy side of the sport â€“ the side rife with broken contracts, infighting, and positive dope tests. These days, I live with my lovely wife in Pennsylvania and share my experiences and views on the sport at Bicycling Magazine, the Embrocation Cycling Journal, and at my own site, PavÃ©.
View all posts by Whit →
This entry was posted in Races and tagged riders. Bookmark the permalink.