Posted on December 17, 2009 by Whit
Here’s the second half of a recent interview we conducted with Embrocation and Rapha’s Jeremy Dunn.  You can read Part 1 here. 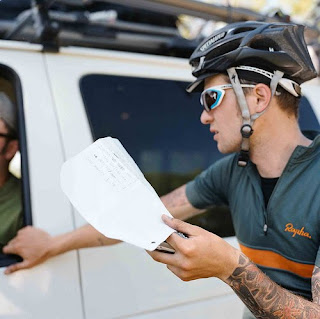 11. Tell us a little about your bikesâ€”what are you riding?

Well, my Rapha Continental bike was elegantly made by Richard Sachs.   My road bike was hand crafted in Switzerland by the fine folks at BMC.   Embrocation Racing cyclocross bikes for the last few years had been custom made by Igleheart. I’ve been pretty lucky to be have found a dear friend in Chris, he makes AMAZING bicycles…so I also have a 29er that he fashioned for me. Itâ€™s called the “Guilt Trip” for two reasons; one of those is because I don’t get to ride it as much as I want to.

This year we have had the amazing fortune to be riding Custom Painted Ridley X-Fire bikes. I have never ridden carbon during cross season, so this is a new one for me as well. A little bit of a departure from the one-off custom guys, but it is always good to try something new and these machines do not disappoint. 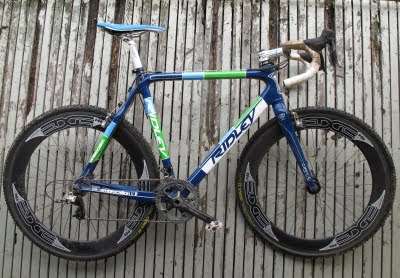 Photo by Jeremy Dunn
When I was in Belgium this past spring I had the chance to tour the Ridley Factory, and I while I was there someone said â€œyou have a cyclocross team right?â€ I said â€œyesâ€ to that and the wheels started turning.

They are a great crew, the people from Ridley and they have done a great job of equipping us with some hands down AMAZING bicycles. Plus, it feels like weâ€™re part of the Belgian cyclocross tradition at this point as well, and that never hurts.

12. Whatâ€™s your favorite piece of â€œclassicâ€ equipment?
I was always a fan of the old Shimano logo. The one with the green light blue and navy blue stripes. Good stuff color wise. Equipment? Mavic rims. I have this Mavic rim display at home that has cross sections of all the rims at the time. Very useful selling tool I might add.   Tubulars are also nice. Are they considered “classic?”    I also have a Lemond steel bike that apparently was made by someone named Pegoretti? I think he’s Italian. In any case, itâ€™s a very nice road bike.
13. Any heroes or role modelsâ€”both cycling and non-cycling?
Heroes, eh? That is always a funny question I think. The way I approach heroes is this: find some amazing qualities in the people, and then surround yourself with these people. Make sure that you interact with them as much as possible and in a genuine way and the experiences that come out of this are going to be hero worthy. Therefore, I have a lot of heroes. So, here goes:
My parents Dan and Kathy have always been my heroes. They are both teachers in many senses of the word and have impressed the “learning” vibe on me. Plus, they’re both really into supporting everything that I’m into, so that always helps. And they’re awesome and hilarious, so there’s that too.
Peter Rubijono. He knows how to go into the dark places not only with his artwork, but also with his bicycle riding. I’ve been riding with him for years now and itâ€™s amazing to see what comes out of both creative outlets for him. But the best part?  He knows how to come back from those places to hang-out and be a great friend too.
Slate Olson and Carey Schleicher-Haselhorst are also heroes of mine. It is pretty compelling to see what they have done with the Rapha brand in only a few short years; I feel pretty lucky to be involved with the two of them. Slate is always coming up with these race ideas and Carey has the design sensibility to make them look abso-freakinâ€™-lutely amazing. Any of the design stuff that you see coming out of the U.S. office is all her.
James Morrison is my business partner when it comes to the Embrocation side of things. We like to call it a Creative/Business separation. I just come up with crazy ideas and he figures-out how to make them reality. He is really good with all that stuff. At some point along the way I realized that I couldn’t do all of this on my own and James happened to be standing there saying “well, I think I could help fill that void.” Plus, he can tear my legs-off on any road ride around…
â€¦I could go on and on about all the people that are heroes to me. It is a seriously involved list.
14. Got anything in the creative pipeline we can look forward to?

Well, yes, of course, there is always something, is there not? I have been working on a few things that should drop around Christmas holiday. I have also been experimenting with this idea of putting out the publication entirely by myself, like, all my writing and all my photosâ€¦ I know, it sounds incredibly vain, but an experiment nonetheless. Something like Edward Bairâ€™s The Art Of Eating, although I just saw the new issue and it looks like he has other contributors as well.

The Rapha Continental is developing quite nicely as well. I have a feeling that you will be seeing quite a bit more of these guys this coming summer. We have the usual Gentlemanâ€™s Raceâ€™s planned for both coasts, but it sounds like we are going to be hitting some of the iconic American Cycling Events around the country. Things like that now-famous D2R2 and Ragbrai and Cycle Oregon. Which, I have to say, if the Continental has taught me one thing it would be something about Community, so I am excited to participate in these classic rides.

Then there is the matter of NAHBS this year too. I have yet to hear if they are going to approve my press pass, so, we shall see how that goes. Although I am interested in seeing what the town of Richmond has to offer. Should be good.

15. And finally, what comes to mind when you hear the word â€œpavÃ©â€?

Nothing. Literally, my mind goes blank.  When I finally had the opportunity to ride the cobbles that were Flanders, Gent and Paris-Roubaix my mind went blank. I thought about all the stuff that people had said. That you, in fact, had said leading up to the moment when I hit the cobbles. But I think the best way I can describe it is that my mind went completely blank. Your brain rattles in your head and you can’t focus for a second.  PavÃ©. What a word.

Boonen Coming Through from j. dunn on Vimeo.

Thanks for the time, Jeremy–I know youâ€™re a busy fella.  Weâ€™re looking forward to reading/seeing/riding what youâ€™ve got in store!

My experiences might easily fit many cycling fans' definitions of â€œliving the dream.â€ Since getting hooked on the sport watching Lance Armstrong win the 1993 U.S. Pro Championship, I've raced as an amateur on Belgian cobbles, traveled Europe to help build a European pro team, and piloted that team from Malaysia to Mont Ventoux. As a former assistant director sportif with Mercury-Viatel, I've also seen the less dreamy side of the sport â€“ the side rife with broken contracts, infighting, and positive dope tests. These days, I live with my lovely wife in Pennsylvania and share my experiences and views on the sport at Bicycling Magazine, the Embrocation Cycling Journal, and at my own site, PavÃ©.
View all posts by Whit →
This entry was posted in Uncategorized and tagged interview, mavic, pave, roubaix. Bookmark the permalink.