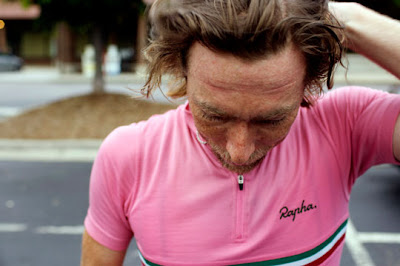 Photo of Ben from http://www.rapha.cc/asheville-nc

Well, the Rapha Continental Centre Ramble has come and gone and I’m still sifting through the conversations and images flooding my mind. In short, I’m stupefied by what Daniel and his team have undertaken. (You can read the ride reports and look at pictures and videos at the Conti’s Road Journal.)

But for now, here’s a taste: on Monday in Western Maryland, the team did a 130-mile ride with 16,000 feet of climbing. After a rare rest/travel day Tuesday, yesterday we took them on about 80 miles of some of Central PA’s finest roads and dirt climbs. Then they packed the van and rolled down to D.C. for another 120-miler today. Tomorrow’s the Gentleman’s Ride in White’s Ferry, and then Sunday brings a 125-mile Gentleman’s Race in New Paltz, New York.

And that’s the end of the Mid-Atlantic portion (which began earlier last week). But don’t worry, there’s still the Midwest, the Rockies, and the Northern Rockies left to conquer. I can’t wait to see the stats at the conclusion of the project.

Daniel hasn’t seen his family in over 3 weeks; he and the van have already logged over 8500 miles. There’s enough film to shoot a World War and too many stories for the guys to have recollected during our 24 hours together.

Thanks to Daniel for the opportunity; James for helping scout the ride, creating the spoke card, and driving the van; Graeme and Ben for pulling my energy-depleted, skinny butt around yesterday; and the team for being terrific guests and an overall swell group of riders.

And Dave, get better soon. We’re all happy you’re not too worse for wear. (Read all about what happened here.)

Of course, more will follow as we get our wits about us. Photos too!

My experiences might easily fit many cycling fans' definitions of â€œliving the dream.â€ Since getting hooked on the sport watching Lance Armstrong win the 1993 U.S. Pro Championship, I've raced as an amateur on Belgian cobbles, traveled Europe to help build a European pro team, and piloted that team from Malaysia to Mont Ventoux. As a former assistant director sportif with Mercury-Viatel, I've also seen the less dreamy side of the sport â€“ the side rife with broken contracts, infighting, and positive dope tests. These days, I live with my lovely wife in Pennsylvania and share my experiences and views on the sport at Bicycling Magazine, the Embrocation Cycling Journal, and at my own site, PavÃ©.
View all posts by Whit →
This entry was posted in Uncategorized and tagged ramble, rapha, ride lugged. Bookmark the permalink.