Hope you had an enjoyable weekend! Here’s what’s on our minds:

1. I’m not sure how we let this one slip through the cracks, but what are your thoughts on Ghent-Wevelgem being moved to the Sunday before the Tour of Flanders? I plan to share my thoughts in a future post, but for now I’m curious what you have to say.

2. The 2010 Giro route was announced by RCS on Friday and it looks to be quite exciting. The Gavia, Zoncolan, Plan de Corones and Mortirolo are just a few of the legendary climbs the race will visit. Interestingly, the Giro’s organizers seem to have made a nod to the ASO by including about 15km of strade bianche in Stage 7 to Montalcino. Alessandro Ballan has already listed the day as one of his targets, should BMC be invited.

3. And speaking of BMC, I’m impressed at the approach they appear to be taking to their first season as one of the World’s elite teams. While they won’t spurn an invitation for the Tour, they don’t seem to be banking on it either, instead choosing to make a name for themselves in the Classics, the Tour of California, and the Giro. Ochowicz and Lelangue know how fickle the ASO can be; the risks of selling your sponsors tickets on the “Tour-Or-Bust” bandwagon are much too great. If they are indeed invited to the Tour, look for them to shine. But look for them to have already scored some impressive results by mid-May, making Tour participation the icing on the cake.

4. About a year ago, I purchased a copy of Joe Parkin’s A Dog in a Hat, his story of “mud, drugs, blood, betrayal, and beauty” during his days racing in Belgium. Over the weeked, it finally made its way to the top of my stack. Right now I’m about 50 pages in and have had a hard time putting it down. Maybe it’s because he writes about things I saw and experienced myself; maybe it’s because the stories he shares are so honest and entertaining. Regardless, it’s worth grabbing a copy for yourself. (Or at least downloading Chapter 1 and Bob Roll’s Foreward.) Joe also runs a terrific blog called 6 Years in a Rain Cape where he answers reader questions. He’s also expressed his willingness to do an interview for Pavé–look for that in a future feature. If we’re lucky, maybe we’ll get a first look at the sequel, Come and Gone. 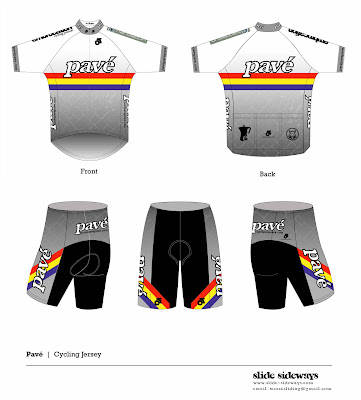 5. And finally, if you haven’t had a chance to take a look, here’s our new kit. We’re also planning long sleeve items, cycling caps, and winter hats as well (images of those will be published soon along with pricing and ordering information). Thanks to all who have inquired so far; your interest is flattering and appreciated!

Have a great Monday–what’s on your mind?

My experiences might easily fit many cycling fans' definitions of “living the dream.” Since getting hooked on the sport watching Lance Armstrong win the 1993 U.S. Pro Championship, I've raced as an amateur on Belgian cobbles, traveled Europe to help build a European pro team, and piloted that team from Malaysia to Mont Ventoux. As a former assistant director sportif with Mercury-Viatel, I've also seen the less dreamy side of the sport – the side rife with broken contracts, infighting, and positive dope tests. These days, I live with my lovely wife in Pennsylvania and share my experiences and views on the sport at Bicycling Magazine, the Embrocation Cycling Journal, and at my own site, Pavé.
View all posts by Whit →
This entry was posted in Uncategorized and tagged ghent-wevelgem, giro, monday musette, parkin, strada bianca. Bookmark the permalink.