Todayâ€™s Musette comes a bit late in the day, so letâ€™s jump right in: 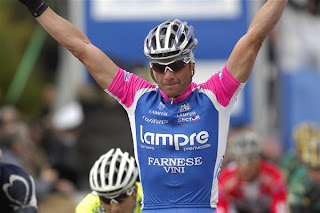 1. This weekendâ€™s racing went pretty much as planned with Alessandro Petacchi taking the win in Italy, Robbie McEwan and Oscar Freire (today) taking wins in Mallorca, and Team Sky winning the TTT in Qatarâ€™s first stage. The Etoile des Besseges ended with a bit of drama following Samuel Dumoulinâ€™s relegation in the penultimate stage. When it was all said and done, the Cofidis rider took the overall title though, but only after a stomach virus ravaged the overnight leaderâ€™s hotelâ€”leading to several riders not even taking the start Sunday.

2. Qatar and Mallorca continue this week, while the Tour du MediterranÃ©en begins Wednesday with 5 days of racing across southern France. For the most part, the race profile is relatively flat, but on the last day, the traditional ascent of the 1st-category Mont Faron ends the race with a bang (not to mention the rest of the categorized climbs that speckle the dayâ€™s route). If I were a betting man, Iâ€™d put my money on the Dutch with Vacansoleilâ€™s Johnny Hoogerland getting the nod over Rabobankâ€™s Robert Gesink. Gesink and his team have little to prove at this point in the season, but Vacansoleil needs every win it can get to earn one of the coveted Wild Card invitations to the 2010 Tour de France. Hoogerlandâ€™s performance in Marseille two weekends ago is enough to convince me that heâ€™s the man to beat at the Med.

Others to watch? Alejandro Valverde could easily take the win, while his teammate Christophe Moreau and  AG2R’s Cyril Dessel are Franceâ€™s best hopes for a native winner. Garminâ€™s bringing Tom Danielson; we might soon know if the first half of his 2009 Vuelta was a fluke. And letâ€™s not forget the guy we all love to hate, Alexander Vinokourov.

Regardless, my moneyâ€™s with Hoogerland–you heard it here first.

3. And speaking of hearing, riders racing in the USA wonâ€™t be hearing directors in their ears anymore as it was announced last week that USA Cycling is banning race radios in all but its most prestigious events. While I wonâ€™t take sides (not yet, at least), I will take a moment to highlight what I consider to be an entertaining exchange on the subject between VeloNewsâ€™ John Wilcockson and Johan Bruyneelâ€”on Twitter.  Here it is:

“Glad to see USA Cycling has endorsed UCI ban on radios/earpieces for all domestic races. Only ToC, ToM, Philly are exempt. Back to basics!”

“@johanbruyneel So let’s have a real debate on the issue, Johan. We can publish it in the next VN. What do you say?”

â€œ@johnwilcockson – no need 4 a debate on this John. Do people want 2 discuss use of navigation system & cell phones nowadays? Don’t think so!â€

After you get over the fact that this exchange took place on Twitter, there are some interesting things to note. First of all, Johan Bruyneel really likes race radiosâ€”enough to use capital letters. Second, one can’t help but feel the assault on radio usage must really be gaining steamâ€”not because of the USAC ban, but because someone like Bruyneel is taking it SO seriously. After all, the ban wonâ€™t affect Bruyneelâ€™s riders in any of the races Radio Shack plans enter, so why does he care so much? Might he be feeling that this is just the tip of the iceberg? Could he be afraid that other promotersâ€”and maybe even the UCIâ€”will be monitoring the situation closely in order to determine its viability in their own events?

Itâ€™s too bad we canâ€™t see a Tour of California run in complete radio silence; it would be nice to see what kind of effect the radios (or lack thereof) would have in such a prominent event.

4.While we’re on the subject of bans, The Tour of Murcia has banned all Italian teams in an apparent response to Italyâ€™s ban on Alejandro Valverde. Talk about cutting-off your nose to spite your face!

5. In a related news item, Alejandro Valverdeâ€™s Caisse dâ€™Epargne team is one of several Spanish teams not riding the Tour of Murcia due to safety and organizational concerns. 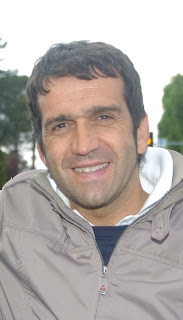 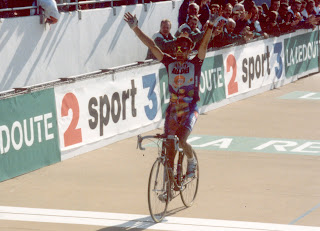 Fotoreporter Sirotti
That’s it for today!  Share your comments below: race picks, radios, and memories of Franco Ballerini.
Thanks for reading!

My experiences might easily fit many cycling fans' definitions of â€œliving the dream.â€ Since getting hooked on the sport watching Lance Armstrong win the 1993 U.S. Pro Championship, I've raced as an amateur on Belgian cobbles, traveled Europe to help build a European pro team, and piloted that team from Malaysia to Mont Ventoux. As a former assistant director sportif with Mercury-Viatel, I've also seen the less dreamy side of the sport â€“ the side rife with broken contracts, infighting, and positive dope tests. These days, I live with my lovely wife in Pennsylvania and share my experiences and views on the sport at Bicycling Magazine, the Embrocation Cycling Journal, and at my own site, PavÃ©.
View all posts by Whit →
This entry was posted in Uncategorized and tagged hoogerland, monday musette, petacchi, racing, radios, tour du med, twitter. Bookmark the permalink.