With so much going on this week, I thought a special edition of the Musette was in order.  Here we go:

1. Tyler Farrar won todayâ€™s Scheldeprijs, continuing the fine form heâ€™s displayed so far during this yearâ€™s Belgian Classics. Itâ€™s Farrarâ€™s second win of the season following his victory in Stage 3a of the 3-Days of DePanne. More importantly, itâ€™s the young Americanâ€™s fifth major top-10 result on Belgian soil this season following his 3rd-place finish in the Omloop Het Nieuwsblad, 9th-place in Ghent-Wevelgem, and 5th-place in the Tour of Flanders. All Tyler needs now is a solid finish in Sundayâ€™s Paris-Roubaix to cap a fantastic spring for the Garmin rider. With Roubaix being a race known to favor the strong and powerful, Farrarâ€™s streak might not be over.

As for the race itself, it pretty much went as expected. Filippo Pozzato was a last-minute addition to the start list; he finished in one of the front groups along with several other favorites for the Hell of the North on Sunday. Tom Boonen did hit the deck with about 37km to go, but was able to rejoin the leaders with enough time left to still finish 18th. I was a bit surprised to see Andre Greipel finish so poorlyâ€”especially after his team (and his mouth) worked so hard to position himself for the win.

2. Lost in the hoopla surrounding Sundayâ€™s Tour of Flanders was an interesting Tweet from George Hincapie following some criticism he received from a fan via a comment at Podium Cafe. 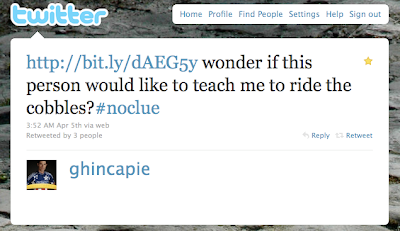 Not too sure if any of it’s earth-shattering, but I find it interesting that the line between riders and fans grows increasingly thin thanks to sites like Twitter.

3. And speaking of George, check this out from his first year at Roubaix. Tears for Gears is a terrific site for fans of the 1990â€™s–itâ€™s helping me getting over throwing away my old copies of Winning Magazine.

4. In case you missed it, here’s this again:

5. The Tour of the Basque Country is underway, and all signs point to the controversial Alejandro Valverde having a terrific Ardennes campaign. Oscar Freire and Garminâ€™s young squad seem poised for some nice results as well. Freire currently leads the GC, but tomorrowâ€™s â€œQueenâ€ stage looks certain to shake things up. Stay-tuned.

6. Speaking of Pais Vasco, Francesco Gavazzi won todayâ€™s stage for Lampre, a squad in an uncomfortable spot thanks to some doping products found in the home of Lorenzo Bernucci. According to Bernucci, the products belong to his wife and brother. Sure they do, Lorenzo.

Some are already talking about Lampre being booted from the Tourâ€”could Vacansoleil finally get its chance?

7. And last, but not least, I did a fantastic ride this past weekend called the Hell of Hunterdon. If you happen to live near Philadelphia, you need to participate in next yearâ€™s edition (or for that matter, in this yearâ€™s edition of its sister-event, the Foolâ€™s Classic). Just over 76 miles in length, the ride includes about 12 miles (18 sections) of some of New Jerseyâ€™s finest unpaved and gravel roadsâ€”like Lâ€™Eroica, but without the wine, costumes, and vintage bikes. If you plan on doing Battenkill next year, youâ€™re a fool if you donâ€™t ride the HoH as training.

The rideâ€™s organization was smooth and efficient, and free beer and pizza were offered to all finishers. While I was a guest of the organizer, the registration fee was nominal for such a wonderful dayâ€”especially for those who pre-registered. Better still, of the 100 or so people registered in advance, 28 of them won raffle prizes from companies including Lazer, Belgum Budder, and Classic Cycling Essentials. Be sure to bookmark the eventâ€™s website, and add it to your calendar for next spring.

8. And by the way, I’m looking for a pair of 700×23 Vittoria Open Tubular CX’s with black rubber and tan/skin sidewalls.

I’ve also been inspired by a recent Twitter conversation to track down some Briko Stingers or Zens.

Drop me a line at paveblog@gmail.com if you think you can help me out.

My experiences might easily fit many cycling fans' definitions of â€œliving the dream.â€ Since getting hooked on the sport watching Lance Armstrong win the 1993 U.S. Pro Championship, I've raced as an amateur on Belgian cobbles, traveled Europe to help build a European pro team, and piloted that team from Malaysia to Mont Ventoux. As a former assistant director sportif with Mercury-Viatel, I've also seen the less dreamy side of the sport â€“ the side rife with broken contracts, infighting, and positive dope tests. These days, I live with my lovely wife in Pennsylvania and share my experiences and views on the sport at Bicycling Magazine, the Embrocation Cycling Journal, and at my own site, PavÃ©.
View all posts by Whit →
This entry was posted in Races, Rides and tagged garmin, hell of hunterdon, hincapie, monday musette, pais vasco, scheldeprijs, spain, tears for gears, twitter, valverde. Bookmark the permalink.