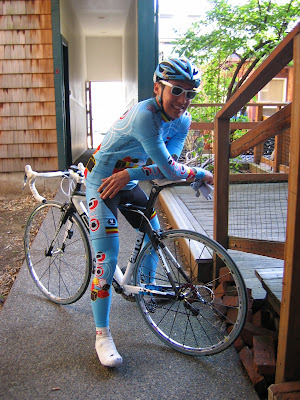 We had some publishing difficulties yesterday, but here’s the inaugural post in what we hope will become a regular feature (not the errors yesterday) on PavÃ©. Zac Daab is a legend in many circles–on both coasts. Originally a member of the Seven Cycles crew, Zac moved to Seattle where he is now the owner and proprietor of the Cascade Bicycle Studio. Perhaps more importantly, he and a few friends are the brain-trust behind HUP United, a team of like-minded individuals with a penchant for many of the wonderful things we here at PavÃ© appreciate, in particular: Belgium, dirt, and of course, pavÃ©.

We hope you enjoy the interview, and we thank Zac for his willingness to be our first subject!

First of all, Zac, thanks for taking the time to chat with us. Let’s start with some background: what would your 6-word memoir be?

“Do great work; take risks.” I guess that is five words!

We’ll accept five words; math was never my fortÃ© either. Can you tell us a bit about the beginnings of HUP United. ? Who, what, where, when, why, etc.?

HUP United started when I was at Seven Cycles in Boston. It was really just me and a few fellow friends at Seven: Max, Bernard, and Mike S. We kinda wanted a shop team, with a specific shop kit. It was getting a bit complicated making it happen, so I just made it happen, without any connection to Seven. The first race we went to was in New Hampshire, part of the Verge Series. It was completely snowy on the course; the night before they plowed. We had a wicked good time, and the traveling to races together really formed HUP. HUP started out with 4 folks, and now we have about 8 regions, with nearly 100+ CX honch and honchettes lurking about. 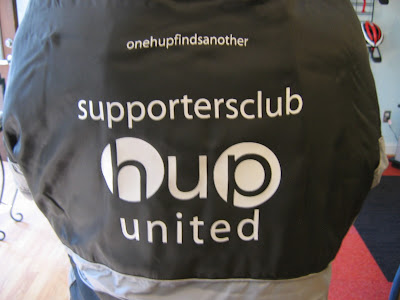 Can you summarize the â€œHUP philosophyâ€ for folks who might be unfamiliar with it?

Race your bike. This is not about sponsorship; we are our own sponsor. Onehupfindsanother.

HUPâ€™s clothing and image certainly make several nods to Belgium and Belgian cycling culture; can you tell us more about that? Were these premeditated decisions, or did they just happen organically?

Our kit started out green and blue. We felt it was too close to another New England team though, so we set-out to create some designs based on Mapei and the Belgian National kit. Mapei was such a unique set-up with an Italian-based company joining forces with Belgian and Italian riders, and just destroying the spring classics, with style. The kit was truly flamboyant and loud. We liked that, and were inspired by this sensation. Now, if you go to nearly any cross race in America, itâ€™s guaranteed youâ€™ll see at least one HUP rider FULLY kitted out. We have three iterations of kit right now: Blue, NOIR, and Blanco. NOIR has kinda been the CX kit, Blanco is the Memorial Day to Labor Day kit, and Blue is classic. 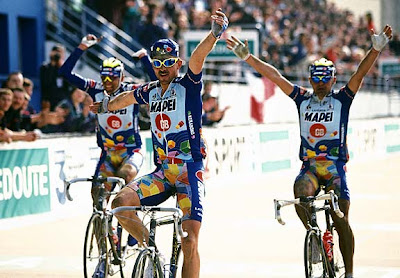 After several years spent working for Seven, youâ€™re the founder/owner/proprietor of the Cascade Bicycle Studio. What inspired the switch? Were you at all apprehensive to give it a go on your own?

I gained so much experience at Seven Cycles, working with Rob Vandermark on fit and design, and working with the sales and marketing folks who really have a good handle on a service-based brand. When I went out on my own in 2005, I knew that I could be successful because Seven was a very strong brand, and I had a very strong relationship with the company. I honestly can say that Seven is in a class of itâ€™s own, and is way ahead of the curve in so many areas.

Lately thereâ€™s been a lot written about the Pacific Northwestâ€”particularly Portlandâ€”bike scene. Whatâ€™s your take? What makes the area so special?

Portland is a funny place. Itâ€™s like Park Slope and Williamsburg rode their bikes to the West Coast. I think part of the special-ness centers around a very vibrant geographic location where there is a lot of green, access to major alpine areas, and ocean. Portland is comprised of extremely talented and creative folks, who value the outdoor lifestyle. And, at the end of the day, Portland is still a small town, with an NBA team. I know the city has been extremely pro-active about transportation and bicycling, and I believe that is also a draw. That said, if I see one more t-shirt with a unicorn, Iâ€™m going to vomit. Iâ€™m waiting for the bumper sticker that reads: â€œI grew a beard, and all I got was this lousy lugged steel frame.â€

What about your bikes? Can you take us on a tour through your stable?

My current stable is quite plentiful right now. There is a fine line between the bikes I ride because I own a bike shop with demo bikes, and the bikes I own outright. That said, right now on the road I am riding a BMC Racemaster SLX 01 which is an aluminum/carbon frame. I also have my Seven Odonata (now called the ID8) from 2000. This serves as my winter rain bike with full fenders, and my base mileage (3+ hour) bike. In Seattle, nearly everyone has a rain bike. And they are usually nice. For CX, I have three bikes: custom Sycip aluminum, custom titanium Seven, and a 333 fabrication single-speed. I was riding the Seven the other day, and thought it was super cool how versatile this bike has become: I ride it regularly as a commuter single-speed with a fender, I have raced it in Belgium at Masterâ€™s Cross Worlds, I have ridden it up the Koppenburg, I have won single-speed cross races on it, and right now itâ€™s set-up as a single-speed with file treads as my summer commuter. Finally, I have a Sycip Java Boy which is the bike of all coffee bikes, with painted Honjo fenders, and Shimano Alfine disc/internal group. Oh, and I just got an Ibis Mojo SL ATB rig with 5.5â€ of travel. Itâ€™s insane! 24 lbs and 140mm of travel in the rear. I have a Seven ATB single-speed, too. I think thatâ€™s it. My girlfriend Beverly and I rode a Co-Motion tandem for the first time last weekend and had a ton of fun. 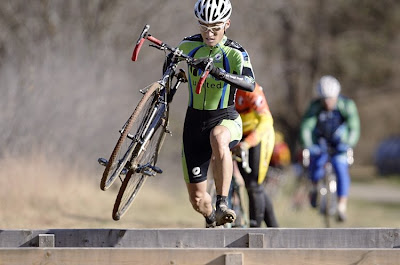 Over Memorial Day weekend, I pretty much had the perfect riding weekend. On Friday afternoon, I went out with Max and B and we hammered the s*** out of each other (that sounds wrong) and rode for about 1.5 hours with relentless attacks on our road bikes. It was a local road ride, and it was 70 and sunny. Saturday I rode up to Woodland Park, a city park about 10 blocks from my shop, and I pre-rode a cross course that weâ€™re using for a race this fall in Seattle. There has never been a CX race there, and me and my friend Terry are putting on a 6-race series this fall called MFG Cross. I rode my singlespeed with file treads. On Sunday, my pal Dieter and I went to Bellingham to ride our ATBâ€™s. We spent about 5 hours exploring a local mountain called Galbrith Mountain. Lots of small connected trails and many possibilities to get lost. D hucked some ILL 10 footers. I watched. We ate burritos. On Monday, Beverly and I went for a tandem ride in the city, and ended up at a local beach. I havenâ€™t ridden a tandem in a while, and it was a ton of fun having some chitty-chat on the bike, and staying together.

What, no pavÃ©? We’ll forgive that one for now. Do you have any heroes or roll modelsâ€”both cycling and non-cycling?

VDB. What else is there to say about the dude? Wicked doper, hopeless comeback, but few look better on a bike than Frankie Boy. I’m also big into basketball. I am a fan of CP3 (that’s Chris Paul-ed.) of the NBA’s New Orleans Hornets, and really liked watching Rajon Rondo play this season. Rondo is like the little man at 6â€™2″, and was dunking OVER Dwight Howard this year. Vicious. 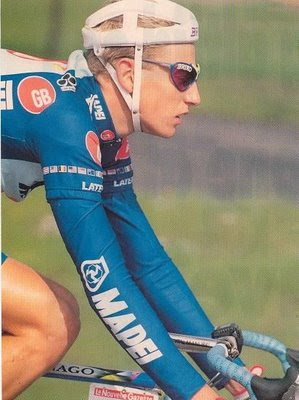 What do you want to be when you grow-up?

And finally, what comes to mind when you hear the word â€œpavÃ©â€?

There is a photo on pages 68 and 69 of the book Flandrien (we’re trying to locate copies of these-ed.). I think this photo does justice to what it must be like to ride pavÃ© in epic conditions. I rode some of the Ronde a few years ago, but it was tame on a cross bike with 32â€™s in the sun and dry conditions. To race for 5+ hours on constant pavÃ© must just be a nightmare. Or, “ass-mare”.

Thanks so much, Zac. Please keep us posted on all that’s going-on over at HUP.

And again, please accept our apologies for yesterday’s publishing technical difficulties. Thank you for reading!

My experiences might easily fit many cycling fans' definitions of â€œliving the dream.â€ Since getting hooked on the sport watching Lance Armstrong win the 1993 U.S. Pro Championship, I've raced as an amateur on Belgian cobbles, traveled Europe to help build a European pro team, and piloted that team from Malaysia to Mont Ventoux. As a former assistant director sportif with Mercury-Viatel, I've also seen the less dreamy side of the sport â€“ the side rife with broken contracts, infighting, and positive dope tests. These days, I live with my lovely wife in Pennsylvania and share my experiences and views on the sport at Bicycling Magazine, the Embrocation Cycling Journal, and at my own site, PavÃ©.
View all posts by Whit →
This entry was posted in Uncategorized and tagged interview, mapei, vdb, zac daab. Bookmark the permalink.